Palgrave Macmillan recently published New Paths to Public Histories, a volume of essays co-edited by Professor Margot Finn (UCL History) and myself. Publication was met with a flurry of excited emails from contributors engaged in the volume and the wider project of the East India Company at Home, 1757-1857, which had been based at Warwick University and then UCL between 2011 and 2014.

Funded by the Leverhulme Trust, the project re-examined the British country house within imperial and global contexts. It explored the ways in which East India Company families and officials, as well as the commodities they traded, came to shape the material culture and built environments of country houses in eighteenth- and nineteenth-century Britain. 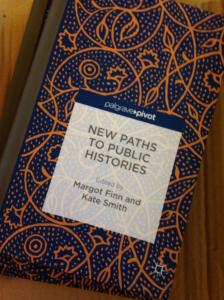 Key to the project was working with a variety of other researchers to extend its scope and reach. The core project team of Margot Finn (Principal Investigator), Helen Clifford (Part-Time Research Fellow), Ellen Filor (PhD Student) and myself (Full-Time Research Fellow) was joined by other academics (such as Joanna de Groot, York and Viccy Coltman, Edinburgh) archivists (such as Margaret Makepeace, British Library and Keith Sweetmore, North Yorkshire County Record Office and The National Archives), curators and museum professionals (such as Claire Reed, National Trust, Sue Stronge, V&A and Sarah Longair, British Museum), local historians (such as Georgina Green), family historians (such as Penelope Farmer, David Williams and Sir John Sykes) and heritage sector professionals (such as Rachael Barnwell, Royal Commission on the Ancient and Historical Monuments of Wales).

These other researchers provided not only advice and insightful comments within the early stages of the project, but also generously wrote case studies and shared their knowledge and source collections. By the end of the project, the core team was enriched by the knowledge and resources offered by over 300 project associates, many of who joined us for our end-of-project conference in July 2014.

Working across different disciplines, sectors and interests raised distinct questions about the how, why, when and where of collaborative research. New Paths to Public Histories provided an opportunity for capturing the many conversations that began during the project about these ways of working.

The volume features a lengthy introduction written by Margot Finn and myself entitled ‘Different histories: relationships between family, local, public and global histories’ that discusses the benefits and challenges of collaboration and co-production and will be really useful for anyone seeking to work across sectors with other researchers. The volume also includes four distinct chapters, each co-written by different individuals involved in the East India Company at Home project.

The first, co-authored by Helen Clifford and Keith Sweetmore (now Engagement Manager for North Region, The National Archives) and entitled ‘From Competition to Collaboration: Local Record Office and University Archives, and the Country House’, explores the historical development of archives held in record offices, universities and country houses. It shows how connections between personnel, skills and documents in these sites have shaped research practice, often fostering dynamic relationships between different collections and institutions. It ends by questioning the future problems that might limit connections and collaborations between archives, universities and diverse research communities.

The second, co-authored by Claire Reed (now Curator for London and South East Region, National Trust) and myself and entitled ‘Collaborating Across Heritage and Higher Education to Reveal the Global History of Osterley Park House’, examines the benefits and challenges of sharing expertise, resources and knowledge across different sectors and communities. The chapter demonstrates the multiple issues at stake in exploring global histories in local contexts and the importance of relationships in completing such work.

The third, co-authored by Georgina Green (Local historian) and Margaret Makepeace (Lead Curator for the East India Company Archives, British Library) and entitled ‘Creating Collaboration: Accessing the Archive’, looks to the many different forms of collaboration that take place in research practice. Reflecting on the projects undertaken by local and family historians, it shows how and when researchers engage with and access archives and the opportunities and limitations they encounter.

Finally, the fourth chapter, co-authored by Ellen Filor (now postdoctoral fellow UCL) and Jan Sibthorpe (Design historian) and entitled ‘Outside the Public: The Histories of Sezincote and Prestonfield in Private Hands’, challenges the notion of the ‘public’ by looking to country houses owned by businesses or private families. It explores the histories that are constructed and delivered by individuals often with commercial interests in mind and demonstrates the important, but often difficult, role such sites play in producing historical knowledge.

Together these chapters and the volume as a whole demonstrates and analyses the multiple collaborations all researchers are involved with when they enter archives, contact others, attend conferences and visit museums. In an age of endless communication the lone scholar model appears defunct. How and why then should we embark on (and recognize) collaboration and what are the practical, financial, ethical and intellectual issues involved in doing so? We hope you enjoy reading it and look forward to continuing the conversation still further.

One thought on “Collaborating to co-produce historical research”