In the latest of a series of posts about the history of display cabinets Donna Taylor, a doctoral researcher in Modern History at the University of Birmingham, follows on Matt Houlbrook, Kate Smith and Chloe Ward‘s earlier posts. You can find out more about Donna’s work here.

Do you have a display cabinet or case in your family? If so, we would love to learn more about it — to see your hidden objects and hear the stories you have to tell. Please feel free to share your stories through the comments section on this blog.

Unlike Matt Houlbrook’s well preserved china cabinet, much of what adorned our nan’s display has been discarded as ‘junk’ over the years.

I can still remember how it looked; she upgraded to a very modern flatpacked, teak effect cabinet in the 1970s. The glass doors slid open and I used to love being allowed to help dust the treasures inside. There was nothing particularly old in there, and certainly nothing of great value.

There was a lot of holiday memorabilia: a paperweight containing a scene from Great Yarmouth seafront, a plastic fan, a small glass test tube, meant to represent a lighthouse, filled with coloured sands that I had carefully chosen during a holiday on the Isle of Wight. A Shire horse, complete with brewer’s dray that my Grandad had made himself from scraps of wood. He worked as a stoker at Marston Green hospital, but he was a brilliant carpenter.

And then there was a small collection of things that seemingly sat outside immediate family memories. They were strangely ‘exotic’, though in a very working class way. Our nan loved capodimonte (I had to google that to find how it was written!) and had a two roses, one was red and one was a pale pink. They were single flowers, sitting on silver coloured stems. I was warned to be ‘careful with them Donna’, though I feel sure that the small chip in a petal of the red one was very likely my fault.

The roses are, very sadly, gone (surely not junk!), but I did rescue a couple of things. The first is nanny’s ‘china’ coffee set. I used to love this as a child and was absolutely NOT allowed to dust it. The story I have of it is that nan had admired it in a hardware shop
up Alum Rock and had mentioned it during a shopping trip with her sisterinlaw,
my aunty Elsie. To her utter delight, aunty Elsie had bought it for her, for her wedding anniversary.

It originally hung on a goldcoloured wire stand. It was so flimsy it never stood the test of my numerous house moves. The coffee set is currently stored in a shoe box. The label on the bottom of the coffee cup reveals its provenance as ‘foreign’.

The second treasure holds a personal memory for me, because I can remember exactly how my nan looked when she first showed it to me. In the shopping centre above New Street Station, there used to be a small store that sold all manner of oriental goods. It had beautifully embroidered kimonos hanging outside to lure you in. We never went in. It wasn’t the sort of shop that people like us went into. But there was an oriental fayre held on the concourse of the shopping centre. Nan must have gone to have a wander around, she told me about it when she got back from her trip as she carefully removed a tissue wrapped parcel from a small paper bag.

She really enjoyed revealing it, like she was sharing a great secret. This was something nan had bought, probably from the housekeeping money, and it
was a thing that made her happy. The little frog paperweight is just about my best family treasure because of this memory. It has always been on display in every home I’ve lived in. 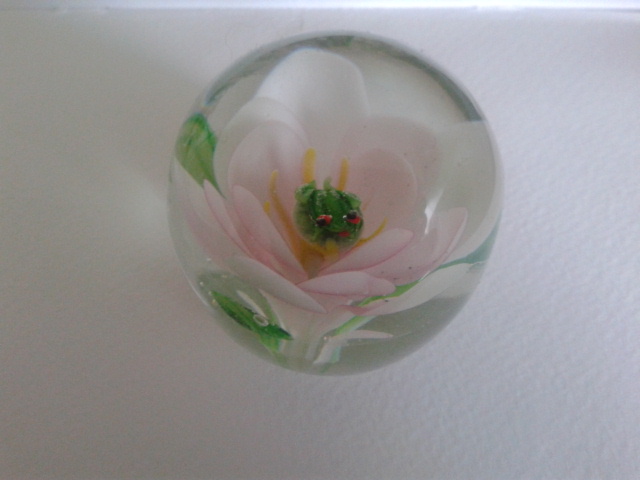 As I uploaded these images to include in the post, I was distracted by Grayson Perry discussing, coincidentally, ‘taste’ at the Chelsea Flower Show. Perry commented how our liking a thing is influenced by all sorts of factors, including class and education.

Arguing that there was no such thing as bad taste (‘perhaps’), he said that ‘taste is just a way of signalling to people in your tribe that you belong’. This made me wonder about the exotic objects in our nan’s cabinet.

What did they mean to her? What did they represent. We were a very
white, workingclass family. We watched and laughed along with all the old racist tv shows and there was always this sense of mistrust of anything or anyone ‘foreign’. At the same time, we also watched and were fascinated by Whicker’s World and held a sense of awe at the exotic. I think our nan’s china cabinet probably encapsulated this duality.

2 thoughts on “Always something there to remind me”